Monday, August 29, 2005
Random creepy sexual aid advert blogging
Has anyone else seen those TV commercials for K-Y Warming Lubricant? There are a few of them. They always start out with this man reading a book or newspaper, and then this woman starts talking (somewhat clinically, like a school teacher or some other prude) about how this new K-Y lubricant warms to the touch. And she's really smug about it, too. Like, "I have some warming lubricant, what do you have?" This causes the man to become instantly interested in her.

You can see kind of a weird silent slideshow version of this here.

Maybe I'm strange, but it kind of creeps me out the way this man can only be turned on by a very matter-of-fact lecture about lubricant. But hey, it takes all kinds...
posted at 5:00 PM by V
Friday, August 26, 2005
Viking Baddie Blogging
This week's baddie is Grendel's Mom. 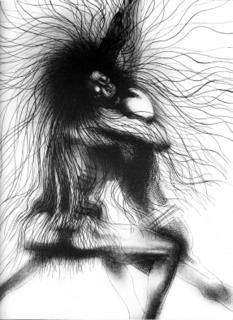 Creepy.
posted at 11:11 AM by V
Thursday, August 25, 2005
Five things I totally heart about Vikings
1. General Hearty Robustness
Hearty Robustness is a trait that few can claim. Ninjas? Sure, they're cool and all. But hearty and robust? Not so much. Robots? Ditto. Note: some pirates may be hearty and robust, but Johnny Depp did not play one of them.

2. Totally awesome mythology
Why doesn't this stuff get as much mainstream attention as the Greek and Roman stuff? Giant wolves! Thor! Ragnarok! This stuff is just fascinating. Also, Ragnarok is fun to say. And it's awesome... dead people sail back to kick the asses of the living. Read more about it here.

3. Use of pure brute strength
Yet another area where Vikings trump ninjas, etc. Vikings are not all that stealthy. They don't have super-advanced technology. But they do have ginormous axes and hammers, and when they come running at you with their ginormous bladed weapons, you'd better get out of the way. It takes a lot of muscle to lift that stuff, and you just know they're gonna swing hard.

4. Cool Boats
I must admit, pirate ships are pretty cool. I'm a fan of pirate ships. But really they have nothing on a good Viking longboat with some scary carved monster on the front. And they rowed, dudes. Pirates didn't row.

5. Vikings cannot be defeated
I have performed a study of Vikings versus a variety of well-matched opponents. It is my assertion that in the following matches:

Vikings will win every time.

So there you have it. Presented with this evidence, none amongst you can now deny the ultimate awesomeness of Vikings.
posted at 1:38 PM by V
Wednesday, August 24, 2005
Viking Wednesday! Freaky gruesome Vikingness, and also kittens.
Here are a couple more links from M, supplemented with additional information I went looking for.

M. lives in an area of England that was well and truly teeming with Vikings, way back in the day. He has produced this link which provides a very interesting bit of history about Vikings in England. It also mentions something called "The Blood Eagle", which is a legendary violent form of execution. There's some confusion as to whether it ever really happened, or whether it's just a story. But either way, it's pretty awesome. I found a brief article about it on Wikipedia.

I tried to find an image to share, but there don't seem to be any. You'd think there would be an artistic rendering or two out there, but no. I kind of doubt y'all really want to see eviscerated ribcages, anyway. I'd kind of like to, though...

Here's another good link, courtesy of Viking Enthusiast M: Viking Answer Lady explains about Berserkers. Sometimes, Vikings liked to put on animal skins and get all worked up into a kind of Primal Rage Frenzy. They were called Berserkers. Again, there's a lot of confusion as to what really went down with the Vikings, and what's just folklore. But all the same, this is some interesting stuff. Go read, educate yourselves.

And now, I give you The Legend Of The Vikings As Told By Led Zeppelin And Some Kittens.
posted at 1:56 PM by V
Tuesday, August 23, 2005
Viking Tuesday: we've hit the Viking jackpot
It's a banner day today, as we have several awesome Viking links for your enjoyment.

This first one comes to you courtesy of my friend Badcandle. Go and check out the Lego Vikings. Legos rock pretty hard. I so totally covet that lego boat. That dragon's not too shabby, either.

Next, here's a website for a television version of Ring of the Nibelungs. I haven't seen this yet, but M. has, and he says it's great. Just going by this website, it looks pretty slick. And hey, I'll watch anything with Max von Sydow in it.

And also from M: 50 Things You Need To Know About The Ring. Humorous look at the Wagner epic. Note: Wagner was batshit crazy. Maybe I'm a masochist, but part of me would sort of like to see the 15 hour incoherent opera...

Be sure to tune in tomorrow, as Viking Wednesday will be quite lurid. We'll learn about Berserkers and violent ritual death. Fun times!
posted at 2:57 PM by V
Monday, August 22, 2005
Viking Game!
Remember back in the 80s when everyone used to play Oregon Trail on the computer? If you were like me, you'd name your party after people you didn't like, and then set your rations to "low" and your pace at "grueling", and then you'd laugh maniacally when they all died of snake bite and dysentery.

But I digress. The good people at the BBC have created a similar kind of game, and it's all about vikings. Hooray! Y'all all go and play Viking Quest, it's fun. I challenge you to beat my score of 735. Which should be pretty easy, as I seem to have chosen the crappest port, the crappest boat, and the crappest crew possible. Although I did have a Berserker, and he kicked a lot of ass.
posted at 3:42 PM by V
Sunday, August 21, 2005
Prepare yourselves for Viking Week
In which V. and M. have decided that Vikings totally kick ass, and endeavor to bring this message to the masses.

M. and I have been all about Vikings for a few weeks now. It all started one night when we were talking about The 13th Warrior and decided we both really wanted to see it. Friends, I must recommend this film. It's full of hearty, robust Vikings doing hearty, robust Viking things. Things like, blowing their noses into a communal water bowl. And dueling with massive axes. And fighting cannibals. Because good lord, if there's anything cooler than Vikings, it can only be Vikings and cannibals together in one film.

But I digress. This week, all week long, you can look forward to Viking Week here at Codename V. Wondrous fun awaits you, as V. And M. have a wealth of Viking awesomeness to share. We totally heart Vikings, and we think you will too. And if you don't totally heart Vikings, Hollywood Film Legend Omar Sharif has a message for you:

Proper.
posted at 2:53 PM by V
Wednesday, August 17, 2005
Why I love Law & Order
A sample bit of dialogue from the episode I am currently watching:

Tough Lady Cop: Can you think of a reason why the killer sodomized your husband with a banana?

Victim's Widow: He was allergic to bananas.

Right, then.
posted at 8:04 PM by V
Tuesday, August 16, 2005
Please pardon our mess, as we remodel to better serve you
Yeah, so, I was pretty fed up with some stuff. The haloscan commenting was really slowing things down A LOT on my end, so it's got to go. But I couldn't figure out how to get it out of my template, so I just re-loaded the whole thing from scratch.

Speaking of the template, I'm gonna be playing around with it in the next few days, so expect frequent changes and stuff. Yeah. I want good blog Feng Shui, and all of that.
posted at 11:09 AM by V
Pizazz, Pizazz c'mon we're gonna give it to ya...
Well, I think I've stopped being pissed off at Blogger, so let's continue.

I told M. I'd get this link for him, but then I thought, why stop with M? The whole world should know the glory of Pizazz.

I've spent 45 minutes working on a massive post, only to have Blogger eat it. And the "recover post" feature recovers less than half of it. FUCK BLOGGER!
posted at 7:23 PM by V
Home
RSS