Saturday, February 18, 2006
A little bit more about M's post...
The absolutely galling thing about the Diary-X situation, IMO is this:

The site is run by some fellow named Stephen. Before Stephen's ONE hard drive on his ONE server failed, he had apparently been soliciting money from his groupies so that he could buy himself a new laptop for personal use (meaning, not related to the operation of his website, just to have it for shits and giggles).

And these idiots were giving him money so that he could purchase his new toy.

From what I remember, Diary-X is actually free to use, the paid service is entirely optional much like livejournal, etc. You get some kind of super-bonus feature if you pay, but I don't recall what that is.

So he's got some people using it for free, and some people paying. God knows what he actually DOES with the money he steals gets from his subscribers, but apparently it doesn't go towards maintaining the service they're supposedly paying for. Also, apparently Stephen just stopped backing up his data sometime in 2004. He could have backed up that data, he just did not back it up. Had he done so, the people who relied on that service (and in many cases actually paid for it) would not be S.O.L. right now.

My point here is, when I pay for a service, I expect my money to be spent first in the upkeep and operation of that service, and when those responsibilities are all clear, then you can go crazy with what's left over. This is called "paying expenses" and "making a profit", respectively. What you can't do is go crazy with my money, buying new laptops and having lame-ass mugs printed up, and then say "oops! I can't afford to provide you with this service any more, because I've pissed away the money you gave me in good faith!"

This is called "being an asshole".

But since I have a modicum of good common sense, I never gave the wanker any money. So no harm done here.

Oh, I feel compelled to share with you another anecdote about this Stephen guy's complete lack of responsibility towards (or respect for) the people who use his service. Some time back, he got himself engaged to some random girl. He decided to announce this to the world by replacing all the blogs on his server with a page that said sonething along the lines of "Look! I've asked this random girl to marry me! And even though you don't know her or me or have anything to do with our lives, I'm hijacking your diary to tell the world, because I can! Who cares if you feel that your personal space has been violated by this! I sure don't! Hahaha LOLLLZ!!11"

That's pretty much when I decided, hey, fuck this. This kind of behavior is for pre-adolescent MySpace kids with angst and bad haircuts. I wonder if he paid for her engagement ring with his subscription money? Or maybe he just gave her one of those mugs instead...

Anyway, my point being, I find it appalling that people continue to voluntarily give this cretin money. The only reason I even know about any of this drama is because a dear friend of mine keeps a personal journal for her friends there, and when I tried to read it a few days ago I got the now-famous "Massive Drive Failure" page. Massive Ethics Failure, it should say. Maybe I should have a mug printed up that says "I am a massive failure" and send it to this Stephen person. But yeah, appalling. As far as I know my friend is far too clever to have actually paid for it, so...

I mean, geez. I'm on blogger now. Blogger has its share of downtime, but at least it's a mainstream, professional site and is run by adults with a moderate degree of common sense. And I don't have to pay for it, and nobody tries to sell me super-lame logo mugs.

Rant over. So totally over.
posted at 9:16 PM by V
Crappy website awards of 2006
I believe V previously published her anarchistic rantings on a site called http://diaryx.com

I understand the said site charged a fee to all users and had regular problems, causing V. to vexate frequently and finally dump them.

The site is currently out of action for a 'hard drive' failure (just the one drive apparently?, not too much planning done there.) But it's 'not a physical fault' - maybe imaginary?

The site charges users to post and does not backup anything? Amazingly, it is asking for donations from it's contributing users to fund recovering the data on it's 'disk' with reparation offers of site merchandise... yes the site is posted on a PC with a single disk that isn't backed up but the owner HAS spent money on mugs and badges to promote it.. Now THAT is bare faced cheek!

I'd hope they'll be buying an extra $100 disk and doing some backups with the money they spent on badges and mugs next time... absolutely incredible!... They even say they'll use the contributions to 'recover' the disk data on providing extra bandwidth!?..

Here are some hints for http://diaryx.com , you can pay me in DiaryX logo mugs and I'll spend them on buying myself a new TV.

Buy a second cheap disk and backup your data
If you only have one hard disk in a server hosting a website maybe floppy disks, zip drives or laservision platters will fit in your 'new' backup scheme.
If I want to make sure I don't lose stuff I usually make a second copy. If I was hosting a website with other people's data I'd be looking at making the best backups possible rather than no backups. 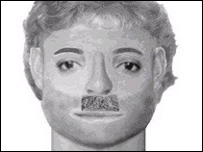 OK, it's been waaay too long since we played here.

This week though, I present our Friday baddie of the week.

Be afraid... be very afraid! Police are currently seeking this character for a heinous burglary in Norfolk, England...

(this is a 100% genuine Norfolk police photo-fit identity picture).
posted at 8:20 PM by M
Home
RSS