Saturday, May 10, 2008
Southland Tales
In which V. is impressed by an exceptional film, but suspects that few others will enjoy it. 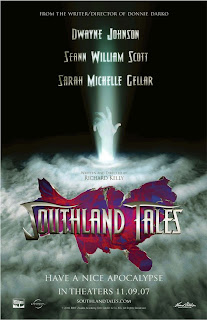 Holy crap, y'all. I don't know where to start. As much as I'd love to rave on and on about how amazing this movie was, I think you're all just going to have to watch it for yourselves. Here's the rundown:

Southland Tales was written and directed by Richard Kelly, the fellow who wrote and directed another phenomenal film you may have heard of called Donnie Darko. They're similar in the sense that they're both very nihilistic, but they're very different stories.

Also: Southland Tales is approaching three hours long. I had to watch it over two days, but this is only because I didn't have a solid three hour block of time to devote to it. I usually don't have a lot of patience for films once they break the two hour barrier, but this was such a compelling story that it could have been twice as long and I'd still have been hooked.

When I started watching this film, I thought maybe it was going to be hard to follow, but it wasn't that way at all. The plot flows naturally and incorporates two dozen or so characters without losing its way. There is mystery, comedy, and action. Production values are through the roof - Southland Tales is visually stunning. Lots of good music as well, but that's no surprise if you've seen Donnie Darko.

I don't really know what else I can say about it. It pretty much defies description or explanation. But something about it really resonated with me, and I absolutely loved it. Ten out of ten stars. Two enthusiastic thumbs up. That said, I don't think it's accessible enough for the average viewer. This is three hours' worth of complicated sci-fi mystery. You have to be able to fully let go of your expectations and just roll with the story.

Anyway. I feel like I failed miserably at this review, as this film was a particularly difficult one to write about. I hope some of you are inspired to give it a try.
posted at 11:53 AM by V
<< Home
Home
RSS